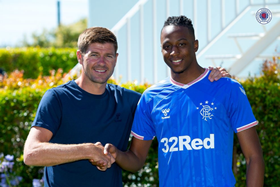 Bitrus Bewarang, the Technical Director of Nigeria Football Federation, has revealed that Glasgow Rangers star Joe Aribo stands a chance of earning a call-up to the Super Eagles for the 2021 Africa Cup of Nations qualifiers.
With Chelsea legend Obi Mikel calling time on his international career last month, manager Gernot Rohr and his lieutenants are searching for his replacement and the ideal candidate has to be playing for a top Champions League club, effectively ruling out the likes of Oghenekaro Etebo, Alex Iwobi and Wilfred Ndidi.
One of the traditional clubs in the United Kingdom, Rangers are competing in this season's Europa League but they are a club with Champions League pedigree, having represented Scotland on thirty occasions.
Aribo has been pivotal in Rangers' success in the Europa League, scoring three goals in his last four matches.
''I will send his name and the club he's playing for to Gernot Rohr,'' said Bewarang to allnigeriasoccer.com.

''Every Nigerian player is a potential national team player if they are doing well in their clubs.

''What we require is that let the coaches spread their tentacles to such clubs and watch such players.''
Born in London, Aribo who celebrated his 23rd birthday last month, says he's open to representing the Super Eagles if approached by the Nigeria Football Federation.
Ifeanyi Emmanuel
Photo Credit : rangers.co.uk