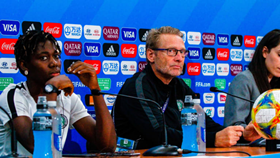 Super Falcons head coach Thomas Dennerby has refused to answer a question on suggestions that the Nigeria Football Federation have dropped one of his assistants, Maureen Mmadu from the technical crew.
It has been claimed that the Super Falcons most capped player in history has been replaced by Wemimo Oni, who will join the team after the Africa Games in Morocco.
Mmadu's contract with the Nigerian Federation ran out in the summer, after the 2019 Women's World Cup in France.
While Dennerby wants Mmadu retained, the Swede has opted not to publicly challenge his employers.
When asked about the proposed change to the coaching crew, Dennerby replied : ''You have to direct this question to the Nigeria Football Federation because I was employed. I am not the one that can answer so you have to ask the one that took the decision.

''Whatever happens around me I always try to do my very best and I keep on doing it.''
Ifeanyi Emmanuel