...the complete Nigerian football portal
Subscribe
'Anyone Can Miss A Penalty' - Abraham Gets Support From Chelsea Coach Lampard
Published: August 15, 2019 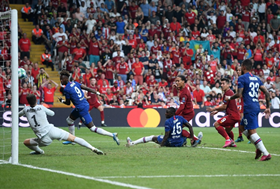 Chelsea were beaten 5-4 on penalties by Liverpool on Wednesday evening in Istanbul, losing their third UEFA Super Cup in the process.
Nigerian striker Tammy Abraham was the only one of ten penalty takers to miss a spot kick in the shootout and the number nine lay on the pitch devastated at the end of the match.
Chelsea coach Frank Lampard has consoled Abraham after his penalty miss and stressed that even the top players have missed penalties.
''I told him not to worry. The fact that he’s confident and wants to step up to take the fifth penalty is pleasing to me,'' Lampard told Chelsea's official webpage post-match.
''I’ve been there myself, anyone can miss a penalty, but what I want is the confidence of a young player to turn up and do that.

''It’s part and parcel of being a player at the top level, which is what Tammy now is. These moments come and we have to be supportive of him because that’s football.''
Abraham won a penalty which was converted by Jorginho in extra-time and had a chance to win the game for The Blues in the closing minutes but was unable to guide his shot goalwards.
Igho Kingsley