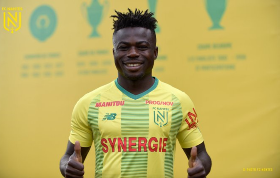 French Ligue 1 side Nantes have confirmed the signing of Super Eagles winger Moses Simon following a successful medical.
The 24-year-old Levante-owned player will be spending the remainder of the 2019-2020 campaign on loan at Nantes, with a purchase option inserted into the deal.
Nantes had to go into the transfer market in search of a new winger after Marcus Coco suffered an injury on the opening day of the season against Lille.
Last season, Simon appeared in 23 official matches for Levante, scoring one goal and providing an assist.
The Nigeria international is a product of GBS Academy and previously represented AS Trencin (Slovakia) and KAA Gent (Belgium) before his move to Spain.
Moses Simon will play with the number 27 jersey at Nantes.
Ifeanyi Emmanuel
Photo Credit : fcnantes.com