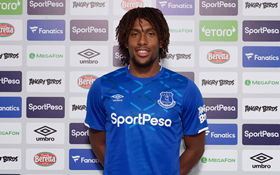 Everton managed to get Alex Iwobi away from Arsenal where he started his career and spent fifteen years, and were willing to wait until transfer deadline day to close the deal.
The Toffees transfer guru and Director of Football Marcel Brands was a key figure in negotiations, selling the club to the Nigeria international with the aid of presentation packages.
According to Brands, Iwobi was signed by Everton to provide competition for playmaker Gylfi Sigurdsson, among other reasons.
Speaking to Everton TV, he said : ''It was not an easy one, probably because a young boy that has played already a lot of games in the Premier League, Champions League and Europa League.

''But in our eyes, a boy that can play in different positions. Played from the side, he can also play behind the striker. In our team, we do not have much competition with Gylfi but we have managed that now with Alex.

''He is 23 years old, already quite experienced and the most important thing he has goals and assists in his game the way he is playing and I think that's also what we were looking for.''
Iwobi has started training with his new teammates at Everton ahead of a potential debut against Watford on Saturday, August 17.
Ifeanyi Emmanuel
Photo Credit : evertonfc.com