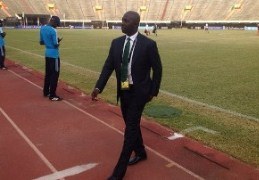 Former Flying Eagles, Olympic National Team and Super Eagles coach Samson Siasia has been found guilty of corruption by the adjudicatory chamber of FIFA's independent Ethics Committee.
Siasia had indeed accepted bribes to influence the outcome of matches which is contrary to the FIFA Code of Ethics.
FIFA came across the name of Siasia in an investigation of Wilson Raj Perumal from Singapore, a notorious match-fixer and several officials have already been suspended as part of that investigation.
Due to the verdict of the global football association, the ex-Nantes attacker has been banned for life from all football-related activities (administrative, sports or any other) at both national and international level.
In addition, the former Super Eagles player received a fine of CHF 50,000 (approximately N18 million in Nigerian currency).
Samson Siasia was in the dugout when the Flying Eagles finished second at the 2005 FIFA World Youth Championship and managed the teams that won the silver and bronze medals at the 2008 and 2016 Olympic Games respectively.
Ifeanyi Emmanuel