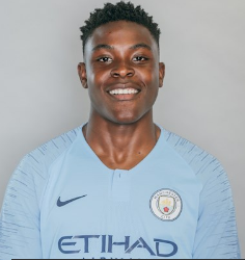 Former Nigeria U20 Invitee Fisayo Dele-Bashiru has made his competitive debut for Manchester City U23 team, aged 18 years, 6 months and 10 days.
The versatile midfielder came off the bench in the 55th minute as the Citizens were beaten 3-1 by Tottenham Hotspur in a Premier League 2 fixture held at Tottenham Hotspur Stadium (London) on Friday evening.
Nigeria-eligible goalkeeper Gavin Bazunu had conceded three goals before Dele-Bashiru entered into the fray, with Troy Parrott netting a brace and Paris Maghoma scoring for the home team.
Fisayo Dele-Bashiru, whose sibling departed Man City for Watford this summer, was a key player for the U18 side last season, making 21 appearances in the U18 Premier League and was involved in their loss to Liverpool in the FA Youth Cup final.
He trained with Manchester City's first team before their Champions League match with Lyon in September 2018.
Dele-Bashiru joined the Etihad Stadium outfit at the age of eight.
Igho Kingsley