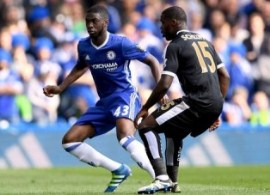 Fikayo Tomori was among the spectators that watched Chelsea's entertaining 4-3 win over West Ham in an U18 Premier League fixture staged at Cobham Training Centre on Saturday afternoon.
Chelsea Youth has tweeted that Chelsea academy products Andreas Christensen, Fikayo Tomori and Mason Mount as well as first team staff Jody Morris, Joe Edwards and Chris Jones were on the scene to watch the U18s first home match of the season.
The Nigerian central defender was promoted to Chelsea U18 team in the 2014-15 season, making 27 appearances for the age group before he was handed his senior debut the following season.
While Jordan Aina and Faustino Anjorin were not in the Blues U18, Joshua Okocha went the distance and captained the Hammers side.
Ed Brand's boys made it two wins from two matches thanks to goals from Myles Peart-Harris, Armando Broja (2) and Dynel Simeu, while Parks, Nebyla and Caiger got on the scoresheet for the visitors.
Tomori won the FA Youth Cup and UEFA Youth League in the 2014-2015 and 2015-2016 seasons.
Chelsea U18s travel to Southampton in their next game in the league on August 24, followed by a home match vs Aston Villa.
Ifeanyi Emmanuel
Photo Credit : chelseafc.com