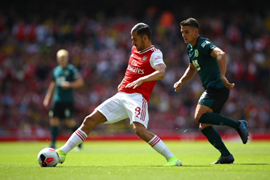 Arsenal continued their perfect start to the season after making it two wins from two matches against Burnley on Saturday.
Lacazette opened the scoring after 13 minutes of action as he put the ball past Nick Pope after a fine and eye-catching pass from Dani Ceballos.

The Real Madrid loanee was on ground to ensure that the Gunners pick up maximum points as he assisted Pierre-Emerick Aubameyang's late winner in the 64th minute.

Arsenal's Nigerians fans were happy with the Spaniard and they took to Twitter to share their thoughts on his overall display.

Here are some of their comments below:

@mic_toby : ''I love the way @DaniCeballos46 controlled the midfield. He is a good player.''

@Sultan_machido : ''It's not just the technical ability Ceballos displays,it's the passion he plays with...just look at how he celebratee the second goal.''

@Okikiolaoluwaa : ''Ceballos my Guy.. Man of the match for me mehn #ArsenalFc''.

@Thekshowkshow : ''Does this ceballos performance mean ozil is confined to the bench or they can play together with the former in a deeper role?''

@day_jeee : ''Ceballos teaching them how we do it in LALIGA #ARSBUR''.