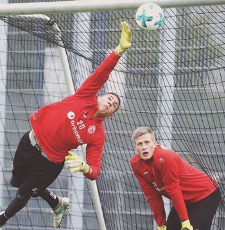 Fortuna Düsseldorf goalkeeper Maduka Okoye is battling to be fit for Nigeria's first international match of the 2019-2020 season, a friendly against Ukraine at the Dnipro-Arena on September 10, allnigeriasoccer.com reports.
The German-born youngster has been handed a golden chance to make his international debut after he was included on a 23-man roster for the friendly against the Ukrainians.
Okoye has struggled with injuries in 2019 and this prevented him from traveling to Africa for the U23 AFCON qualifiers against Libya in March.
The 19-year-old underwent a meniscus operation in the summer ahead of the start of the 2019-2020 season.
He was not in Fortuna Düsseldorf U23s 18-man squad for their last three league matches against Alemannia Aachen (Aug 3), Bonner SC (Aug 10) and TuS Haltern (Aug 17).
Fortuna Düsseldorf have not put a timeline on Okoye's return from injury.
Last season, he appeared in fifteen matches in the Regionalliga West and conceded 25 goals while posting two shutouts.
Ifeanyi Emmanuel
Photo Credit : instagram.com/madukaokoye