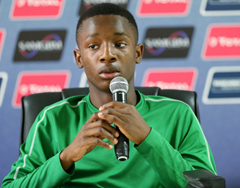 Allnigeriasocer.com understands that Adrian Akande might bid farewell to Chelsea in the coming weeks as he is seriously attracting interest from clubs based in England, Scotland and Germany.
Although the Europa League holders have not officially released the highly-rated winger, he has decided to move onto pastures new because he is not guaranteed first team opportunities in future.
In recent seasons, some young Nigerian players born in England have left Premier League clubs in search of first team opportunities, with Tottenham Hotspur Academy products Keanan Bennetts and Tobi Oluwayemi joining Borussia Mönchengladbach and Celtic respectively while ex-Arsenal starlet Xavier Amaechi moved to Hamburg.
Akande visited Glasgow Rangers this month and was shown around the facilities at The Hummel Training Centre and trained with their youth team.
The 15-year-old is also being chased by Scottish Premiership champions Celtic and clubs in Germany.
West Ham are the latest club battling to sign Akande and he was in action for their U23 team in a Premier League 2 fixture against Newcastle United on Saturday afternoon.
Considering the fact that the talented winger has not made his competitive debut for Chelsea U18s, the Hammers are believed to be doing everything possible to win the race for his services.
Akande has been called up to Nigeria's U17 squad for a training camp in Abuja ahead of the 2019 FIFA U17 World Cup in Brazil.
Ifeanyi Emmanuel