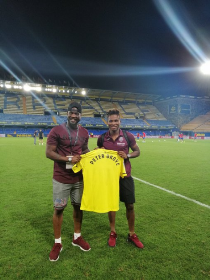 Celebrity musician Peter Okoye of the defunct Psquare group was among the spectators at the Estadio de la Cerámica for the La Liga opener between Villarreal and Granada.
Villarreal have posted a tweet with accompanying pictures thanking the music icon for his support at the Estadio de la Cerámica on Saturday evening.
He was presented with a jersey with Peter Okoye written on the back but without a number to mark his appearance at the Estadio de la Cerámica.
The 37-year-old previously claimed that he used to be a footballer and former Super Eagles captain John Obi Mikel was his junior at the Pepsi Football Academy in Jos and for that reason he is a staunch Chelsea supporter.
Indeed Peter Okoye witnessed a good match between Villarreal and Granada with both teams drawing in an eight-goal thriller and he got his wish as the two Nigerian players he came to watch Samuel Chukwueze and Ramon Azeez were handed run-outs.
Chukwueze opened his goalscoring account for the season with a smart finish in the 73rd minute but Granada battled back to savage a draw.
Igho Kingsley
Photo Credit : villarrealcf.com