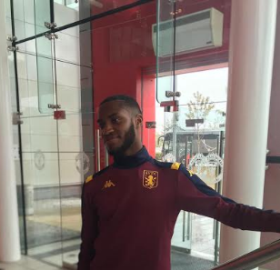 Allnigeriasoccer.com understands that new Aston Villa signing Iffy Udanoh is spoilt for choice over the country to commit his international future to.
The promising central defender had attracted interest from up to eight English clubs including Liverpool and West Ham, before recently penning a two-year deal with Aston Villa following a successful trial.
While Nigerian blood runs through Udanoh's veins, the teenager is eligible to represent the national teams of England and United States in addition to the three-time African champions.
The United States Soccer Federation are believed to be monitoring the progress of the center back with a view to an invitation to their U17 team.
Thankfully, the Nigeria Football Federation led by Amaju Pinnick and Seyi Akinwunmi are advocates for young dual-eligible players, and it has been suggested that Nigeria have opened talks with Udanoh over the possibility of representing the current Golden Eaglets.
Bournemouth goalkeeper Joseph Oluwabusola and Chelsea winger Adrian Akande were part of the Golden Eaglets squad at the 2019 U17 AFCON in Tanzania.
Ifeanyi Emmanuel