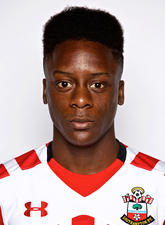 Promising Nigeria-eligible striker Jonathan Afolabi has ended speculation about his future after completing a transfer to Scottish champions Celtic.
A Republic of Ireland  youth international, the 19-year-old was one of the outstanding players at the 2019 U19 EURO and was named in the official UEFA Team of the Tournament.
Afolabi, who was released by Southampton at the end of the 2018-19 campaign, was at Celtic Park to watch Celtic's 2-1 extra-time League Cup win over Dunfermline Athletic on Saturday.
Commenting on the deal, Celtic manager Neil Lennon was quoted as saying by The Scotsman: ''He's here. He’s a young lad from Southampton, we’ve signed him on a free transfer and he’s one for development.

"He’s on the cusp, so he’ll come in and train with us and we’ll get a good look at him in a couple of weeks.

"Then we’ll decide what we want to with in terms of where his progression is.

"He had a great tournament in the Euros. He’s raw, but we feel he has good potential."