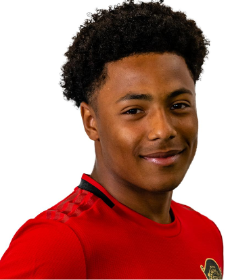 Promising Nigerian striker Dillon Hoogewerf has made his full debut for Manchester United in the U18 Premier League.
The 2003-born player started his first competitive match for the Red Devils youth team as they were beaten 2-0 by Wolverhampton Wanderers at Compton on Saturday afternoon.
This is the first league loss suffered by Manchester United in five games across all age groups, with the first team beating Chelsea on the opening day, the U23s winning their first two games in Premier League 2, while the U18s beat Sunderland.
Signed from Ajax Amsterdam in the summer, Hoogewerf's other competitive appearance for United U18s this season was against the Black Cats on the opening day of the season when he came off the bench in the 66th minute.
The young striker produced the best moment of the first half when he pivoted to get in a shot following Elanga’s darting run down the left.
Republic of Ireland youth international Ayodeji Sotona replaced Hoogewerf in the 68th minute.
Igho Kingsley
Photo Credit : manutd.com