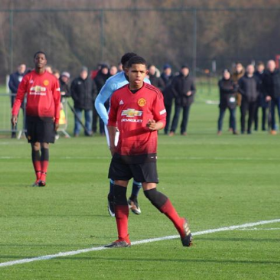 Manchester United Academy star Shola Shoretire has received a call-up to the England U16 squad for international matches this week.
The versatile striker has been promoted to the Young Lions U16s for the 2019-2020 season, having starred for the U15s last term.
Shoretire netted a hat-trick for England U15s in their 7-2 rout of Turkey in an international friendly held at St. George's Park last December.
The 2004-born player is in contention to be named in the starting line-up when England U16s tackle Denmark in an international friendly on Sunday afternoon while their second match comes up against Ireland on Thursday, August 22.
Shoretire was conspicuously absent from the Manchester United side that lost 2-0 to Wolverhampton Wanderers in the U18 Premier League on Saturday as a result of his invitation to the England squad.
Last season, he entered the UEFA history books by becoming the youngest player to debut in the UEFA Youth League aged 14 years, 10 months and 10 days after coming off the bench in the 75th minute of the Red Devils 2-1 road win against Valencia.
Igho Kingsley
Photo Credit : manutd.com