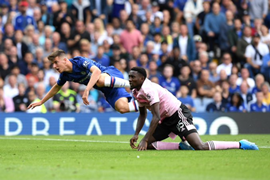 Nigeria international Wilfred Ndidi has been criticized by ex-Chelsea star Andy Townsend following his error in the first half of the ongoing Premier League match between Chelsea and Leicester City at Stamford Bridge.
Seven minutes into the contest, Mason Mount scored at the expense of Ndidi, who was caught in possession just before the penalty area.
''He got the team in front and it was a much deserved lead because it was such an important start, such a great opening. It was a really, really good finish,'' Andy Townsend revealed at half time.

''He does ever so well to rob Ndidi, who is a little bit closed and a little bit short of and not really aware. That's a brilliant goal.''
Liverpool legend Graeme Souness is on the same page as Townsend, and blamed Ndidi for his poor control in the build-up to the goal.
Souness told Sky Sports, according to Leicester Mercury : ''His first touch could be better and he ends up on his feet. He’s in the clear, he’s still under the feet with his first touch - he should be a wee-bit stronger.
''Give credit to Mason Mount who went after him.With Ndidi, if you accept the ball in that situation, you’ve got to assume that the worst-case scenario is that someone’s coming at you and he didn’t''.
Ndidi did not take part in Leicester City's pre-season matches because he was given an extended break after Africa Cup of Nations duties with the Super Eagles.
Ifeanyi Emmanuel
Photo Credit : premierleague.com