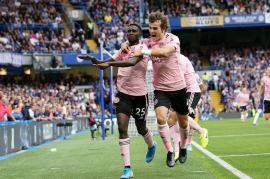 Former Liverpool striker Michael Owen has reserved special praise for Wilfred Ndidi following Leicester City's 1-1 draw with Chelsea in a Premier League clash at Stamford Bridge on Sunday evening.
Mason Mount capitalized on a mistake from Ndidi to give Chelsea the lead in the seventh minute but the Nigeria international atoned for the error when he headed home the equaliser in the 67th minute.
Speaking after the match, which was broadcast by Sky Sports, Owen said : ''He got a redemption there when he scored the goal and what a goal it was. Fantastic ball, out-swinging corner but still managed to land on the edge of the six-yard box which is just perfect really.

''As you can see, Chelsea players all over trying to block the runners. Azpilicueta is the man in the center of the goal and he's not too big himself.

''It's the downside of zonal marking I'm afraid but what a fantastic header, he rose high and headed it hard, great accuracy as well. Brilliant goal and no more than they deserved either''.
Prior to today's match, Ndidi had not scored in the Premier League since he found the net against Southampton on January 12, 2019.
The Foxes number 25 went the distance, Chelsea's Tammy Abraham came off the bench in the 61st minute, while Fikayo Tomori and Kelechi Iheanacho were unused substitutes.
Igho Kingsley
Photo Credit : lcfc.com