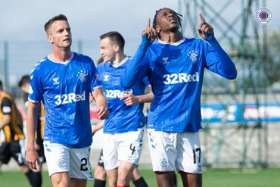 Catch up on the Nigerian players who scored for their respective European clubs in competitive matches on Sunday, August 18.
We begin in Scotland, where Joe Aribo was among the scorers as Rangers thrashed East Fife 3-0  in the Betfred Cup to book their quarterfinal spot.
Six minutes from time, Aribo was the first to react inside the box after a defensive mix-up from a corner and sent the ball into the back of the net for his fourth goal of the season across all competitions.
It was his first appearance for Rangers since he received a maiden call-up to the Nigeria National Team.
In Russia, out-of-favour Super Eagles striker Sylvester Igboun scored in each half as Ufa recorded a 2-0 win over Rostov at Stadion Neftyanik.
On 40 minutes, he headed past the onrushing Pesyakov to open the scoring and scored with a sublime left-footed finish in the 79th minute.
Elsewhere, Tosin Aiyegun was the star of the show at the Olimpiska centra Ventspils Stadiona, netting in the 72nd and 89th minute as Ventspils thrashed Riga FS 3-0 , taking his tally for the season to ten league goals.
Finally, in a Slovakian Fortuna League clash at MOL Arena, DAC rescued a point at home against Zemplín Michalovce thanks to Abdulrahman Taiwo's late goal in the 75th minute.
Ifeanyi Emmanuel
Photo Credit : rangers.co.uk