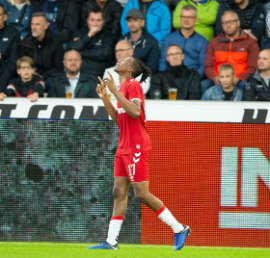 New Super Eagles invitee Joe Aribo is enjoying life at Ibrox Stadium as he continues to put up fine performances for Scottish side Rangers.

He was among the goalscorers in Rangers' 3-0 victory over East Fife on Sunday and his overall display continues to improve from time to time.

The youngster's development could be traced to new skills and tactical discipline he's learning from Rangers manager Steven Gerrard.

The 39-year-old manager was one of Liverpool's greatest and well-experienced midfielders during his playing days at Anfield, hence, he knows how to turn a youngster into a world-class player in no time, which is the case with Aribo.

The 23-year-old midfielder is tipped to continue his steady growth in the game as long as he remains under Gerrard's tutelage for a long period of time.

Super Eagles manager Gernot Rohr is certainly going to benefit from the player's growth as Aribo is expected to become an important part of his team in the nearest future.

Following his debut invitation to the Super Eagles team, Aribo, who is seen as Mikel Obi's replacement, will bring all that he has learnt from the Liverpool legend into action for the three-time African champions, thereby, improving the team's performance in midfield.

Aribo is in line to make his Super Eagles bow when they tackle Ukraine in a friendly match next month.