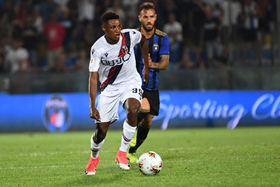 Through a statement on their official website, Italian Serie A outfit Bologna have announced that Nigeria U20 international Kingsley Michael has extended his contract with the club.
The midfielder's new contract will keep him at The Rossoblu until the end of the 2023-2024 season if the two parties honour the agreement.
Michael was a member of the Golden Eaglets squad that won the 2015 FIFA U17 World Cup in Chile, playing five matches for the Emmanuel Amunike led team and was on target against Brazil in the quarterfinals.
He then earned a promotion to the Flying Eagles and was one of the key players in the squad beaten by Senegal in the round of 16 of the 2019 U20 World Cup.
Although Michael has not made his competitive debut for Bologna, he was on the bench when they faced Cagliari and Udinese in the Serie A in the 2017-2018 season.
In all he appeared in 25 matches during his loan spell with Perugia last season, scoring one goals.
Igho Kingsley
Photo Credit : bolognafc.it