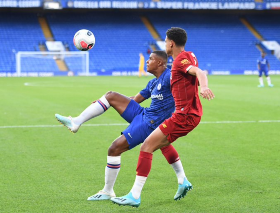 Chelsea U23s continued their fine start to the season with a 3-0 victory over Liverpool in a Premier League 2 match at Stamford Bridge on Monday evening.
While Nigerian duo Faustino Anjorin and Tariq Uwakwe were named in Chelsea's starting line-up, the big news was the inclusion of two first team stars in the shape of Antonio Rudiger and Michy Batshuayi in the team, with both players aiming to gain match fitness after missing the first three games of the season.
Manager Frank Lampard was in the stands to monitor Rudiger, Batshuayi and the outstanding U23 players, and he would have been impressed with Anjorin's display throughout the 84 minutes he spent on the pitch.
Batshuayi gave Chelsea the lead in the 40th minute and he made it 2-0 two minutes after the restart with Anjorin involved in the build-up to the second goal scored by the Belgium international.
In the 74th minute, Chelsea got their third goal through the young Nigerian who slotted into the bottom corner after receiving a pass from Batshuayi.
Both Anjorin, who was wearing the number ten jersey, and Uwakwe hit the woodwork in the second half.
Following his goal against Liverpool, the 17-year-old attacking midfielder has tallied three goals in his first three games of the new season.
Ifeanyi Emmanuel
Photo Credit : chelseafc.com