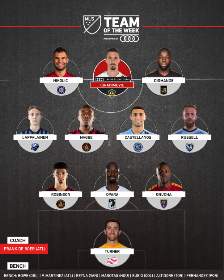 Two Nigeria-eligible players in the shape of Ike Opara and Nedum Onuoha have both been named in the official Team of the Week by Major League Soccer.
In a 3-4-3 formation, Minnesota United's Opara was deployed in the middle of central defense, while Real Salt Lake's Onuoha occupied the left side.
Opara was impressive as Minnesota United posted a shutout in a 1-0 win vs Colorado Rapids on August 15, before starring against Orlando City three days later.
The 30-year-old has made the MLS Team of the Week on seven occasions this season; he won five challenges with his head against Orlando City.
Born in North Carolina, United States, Opara has represented the Americans at U20 and U23 levels and his solitary appearance for USMNT was in a friendly against Bosnia.
Warri-born Onuoha has been picked in the Team of the Week on the back of his imperious display for Real Salt Lake in their 3-0 rout of Seattle Sounders.
A product of Manchester City, he has caps for England's U20 and U21 national teams.
Igho Kingsley