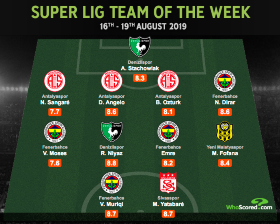 Chelsea-owned winger Victor Moses has been selected in the Turkish Super Lig Team of the Week by Whoscored.com.
The former Nigeria international was at his brilliant best in Fenerbahce's resounding 5-0 win over Gazisehir Gaziantep FK on Monday evening, opening the scoring in the sixth minute before providing the assist for Nabil Dirar's 74th minute strike.
In a 4-4-2 formation, Moses occupied the right side of midfield and was awarded a rating of 7.6 out of 10.
Against Gazisehir Gaziantep FK, the 2013 Africa Cup of Nations winner had two shots on target and won the most fouls for his team, three in total over the course of 77 minutes he was in action.
Fenerbahce manager Ersun Yanal has given Moses a license to be close to the penalty area in the new season and the player's defensive stats suggest that he obeyed the coach's instruction as he made zero tackles, clearances and blocks in yesterday's game.
The 28-year-old is on loan at Fenerbahce until the end of the 2019-2020 season.
Ifeanyi Emmanuel
Latest News