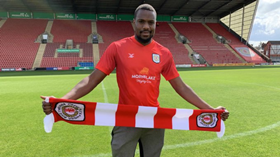 FC Midtjylland striker of Nigerian decent Chuma Anene has joined Crewe Alexandra on a loan deal, according to a statement released by the EFL League Two club on Tuesday.

The 26-year-old has an admirable wealth of experience having featured for some European clubs including Russia Premier League side Amkar Perm where he scored two goals in 28 matches before leaving them in 2017.


Speaking on his move to The Railwaymen, Anene told allnigeriasoccer.com : ''My targets are to try and do as well as possible.
''I want to score and I want to make sure I help the club to their targets this season.

''I didn't pick the number 17 jersey,  Crewe picked it for me, I think it was available''.

The physical attacker has caps for Norway at U16, U17, U19, U20 and U21 levels but remains eligible to wear the jersey of the Super Eagles.