...the complete Nigerian football portal
Subscribe
What Does Ndidi's Show Of Character Against Chelsea Stand For?
Published: August 20, 2019 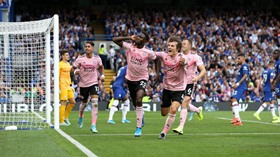 Super Eagles midfielder Wilfred Ndidi uncharacteristically committed a defensive error as he lost the  ball to England U21 international Mason Mount who made no mistake in finding the back of Kasper Schmeichel's net to give the Blues an early lead during Sunday's Premier League clash at Stamford Bridge.

Despite the error, the Leicester City midfielder was lively during the first period of the game seeking to redeem his image.

He eventually got what he wanted in the second half after rising up to meet James Maddison's corner kick with a thunderous header that went straight into helpless Arrizabalaga's net.

Apart from the obvious fact that the Nigerian star is a quality ball-winner and a hard tackler, his goal against Chelsea is a message to Brendan Rodgers that he can become his danger man from set-pieces this season.

The manner with which he executed the goal, despite being under Zouma's pressure, is a testament that he can actually score more headed goals for the team.

The 22-year-old has the required height to become a great threat from set-pieces, he only needs to add more power and  accuracy while nodding the ball.