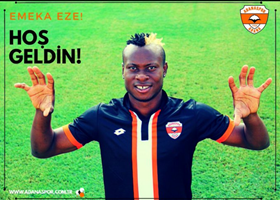 Through their official website, Turkish First League side Adanaspor have announced the signing of Nigerian attacker Emeke Eze from Sturm Graz.
The 22-year-old is spending the remainder of the 2019-2020 season on loan at Adanaspor, with a purchase option included in the deal.
Eze completed the final examinations of the mandatory medical check on Tuesday morning.
Since joining Sturm Graz in the summer of 2017 from Rovaniemi of Finland, the young striker has played 55 games for the Austrian club, scoring eight goals and has four assists to his name.
He has featured in the Champions League and Europa League qualifiers and also played in Bundesliga and OFB Cup matches.
Adabaspor lost 1-0 to Akhisarspor in their first competitive match of the new season.
Igho Kingsley
Photo Credit : adanaspor.com.tr