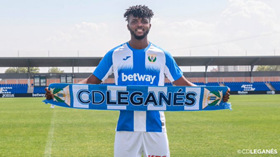 Nigeria national-teamer Chidozie Awaziem has been presented as a player of Spanish La Liga outfit CD Leganes following his loan move from Portuguese setup Porto.
Speaking at his unveiling ceremony in the I.D. Butarque's press room on Tuesday, the central defender revealed that international teammate Kenneth Omeruo and goalkeeper Iker Casillas convinced him to join Leganes.
''I want to thank the club for the confidence had on me. I am very happy to be here. I will do my best to have a good season and help the club," Chidozie said.

"The teammates welcomed me very well. They are very good players. There is the language problem but I will try to adapt as soon as possible.''
Awaziem continued : "I spoke to Omeruo, he is my teammate in the national team. He mentioned me things about the club, explained me the system, told me about the players, how Leganés is...
''I talked to Casillas. I saw him and he congratulated me on my arrival in Leganés, he was very happy. He told me that it is a good move for me''.
Leganes have handed the number 12 jersey to Awaziem for the 2019-2020 season.
Igho Kingsley
Photo Credit : cdleganes.com