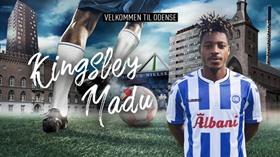 Danish Superliga side Odense Boldklub have announced the capture of Nigeria international Kingsley Madu following a successful trial.
The 23-year-old left-back had been searching for a new team following his release by Zulte Waregem at the end of the 2018-2019 campaign.
On his curriculum vitae, Madu lists Golden Boot Soccer Academy,  El-Kanemi Warriors, AS Trencin and KSV Roeselare as his former employers.
He has signed a contract with Odense Boldklub which runs until the summer of 2020.
Speaking on his transfer to the three-time Danish champions, Madu said : ''In a short time I got a really good impression of the club and the city.
''The teammates and everyone around the team have been incredibly nice to me and I already feel like part of the squad.
''I am a strong and fast left back who will always do my best and I will do everything to win.
''I would like to thank OB for giving me a contract and I am very much looking forward to being able to pay back on the pitch and help the club move in the right direction''.
The 2016 Rio Olympic Games bronze medalist will play with the number 18 jersey at Odense Boldklub.
Igho Kingsley
Photo Credit : ob.dk