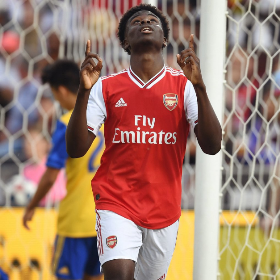 Arsenal manager Unai Emery invited three promising Nigerian teenagers to train with the first team on Wednesday.
Jeorge Bird has tweeted that Bukayo Saka, Folarin Balogun and James Olayinka trained with the first team stars today ahead of their trip to Merseyside to face Liverpool in the Premier League.
Of the aforementioned Nigeria-eligible players, only Saka has games under his belt for the first team but the Hale End Academy product has not been included in a match day squad in the new season.
Midfielder Olayinka traveled with the first team for their pre-season tour of the United States, and featured in the friendlies against Colorado Rapids and Fiorentina, before coming on in the friendly against Angers SCO.
The 18-year-old was involved in Arsenal U23s opening match of the new season at Blackburn Rovers on August 10.
Balogun, 18, has been promoted to first team training on the back of his fine form for the Gunners U23 squad with 3 goals in his first two games in the Premier League 2.
Ifeanyi Emmanuel
Photo Credit : arsenal.com