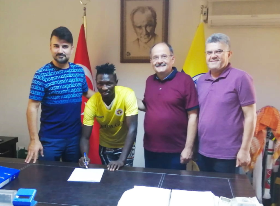 Turkish 1. League side Menemenspor have completed the signing of one-cap Nigeria international Sikiru Olatunbosun.
The 23-year-old has committed his future to Menemenspor for the next two seasons.
Olatunbosun has represented Nigeria Professional Football League clubs Plateau United and Mountain of Fire in the past.
He scored a goal in a league match against Rangers in 2017 that made global headlines and the wonder strike was nominated for the CNN Goal of the Week.
That same year, the striker was called up for an international friendly against Togo, coming off the bench in the second half to make his debut for the Super Eagles.
Menemenspor were promoted to the TFF 1. League at the end of last season after winning the third tier of Turkish football.
They registered an impressive 2-0 road win against Giresunspor in their league opener last Friday.
Igho Kingsley
Photo Credit : menemenspor.org.tr