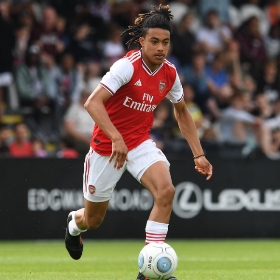 Talented midfielder Miguel Azeez has revealed that he was scouted by Arsenal before he joined the club following a successful trial.
An England U17 international, Azeez is set to sign a three-year professional contract with the Gunners next month after his seventeenth birthday, a reward for the hard work he has put in for their youth teams.
Since debuting for Arsenal U18s while still a schoolboy, he has  appeared in 16 matches in the U18 Premier League, scoring three goals, and made his unofficial debut for the U23s in a pre-season friendly against Boreham Wood last month.
Explaining how he came to be at the club, Azeez told Arsenal's matchday programme, according to Daily Cannon : ''I was playing for my local club in Harrow at the time and one day I stayed behind after training and there was a scout called Paul Whitehead who approached me and my dad and asked if I could come to an Arsenal training session at Hale End for a week-long trial.

''I played one game in my full Brazil kit because I was so excited, and after that game, they asked if they could sign me. To this day it’s the best thing that’s ever happened to me.

''I was trying not to cry, but I was just so excited to tell all my friends at school the next day!

''It’s so motivating to be here because you know that there’s a clear pathway from Hale End to London Colney – and eventually into the first team.
''It’s even more encouraging now that Per’s here too. He’s been with the first team, so he knows what it takes to play for Arsenal.''
Ifeanyi Emmanuel
Photo Credit : arsenal.com