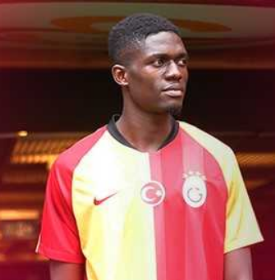 Turkish Super Lig champions Galatasaray have announced that Nigeria U23 international Valentine Ozornwafor will be spending the remainder of the 2019-2020 season on loan at Spanish Segunda División club UD Almería.
Signed from Enyimba of Aba in the summer transfer window, the highly-rated central defender has now been loaned out to continue his development as he is not guaranteed playing time at his parent club in the new season.
Midfielder Ramon Azeez and striker Kalu Uche who have both played for Nigeria at the World Cup previously represented  Almeria.
Ozornwafor was involved in Galatasaray's pre-season matches against RB Leipzig, Augsburg and Bordeaux but was omitted from the match day squad for their first competitive match of the 2019-20 campaign against Denizlispor last Friday.
The 20-year-old started five matches for the Flying Eagles at the 2019 U20 AFCON and earned two more caps for Paul Aigbogun's team at the World Cup in Poland.
He was one of the players included on the standby list when manager Gernot Rohr announced his roster for the 2019 Africa Cup of Nations.
Ifeanyi Emmanuel
Photo Credit : galatasaray.org