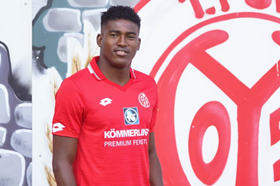 European champions Liverpool initially planned to sell three Nigerian players in the summer transfer window but ended up loaning the trio.
The Liverpool Echo has reported that despite Liverpool's desire to sell, Ejaria and Awoniyi only left the club on loan while a permanent move also could not be found for Ojo.
Ojo is spending the whole of this season at Rangers, while Awoniyi and Ejaria have agreed loan deals with Mainz 05 and Reading FC respectively.
The winger has flourished since his move to Scotland, scoring 4 goals in 7 appearances across all competitions, and Ejaria has caught the eye in his last two games for the Royals.
Nigeria U23 international Awoniyi made his Bundesliga debut on the opening day of the season against SC Freiburg after coming off the bench in the 86th minute.
With the exception of the former Flying Eagles star, the aforementioned players have made competitive appearances for Liverpool's first team.
Igho Kingsley
Photo Credit : mainz05.de