...the complete Nigerian football portal
Subscribe
Why Henry Onyekuru Could Become The Next Anthony Martial At Monaco
Published: August 22, 2019 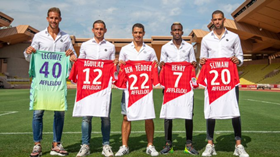 Nigerian winger Henry Onyekuru completed his move to Monaco from Everton and he made his Ligue 1 debut against Metz on Saturday having spent just five days with his new teammates.
Unfortunately, things didn't go well for the 22-year-old star who couldn't influence the outcome of the game which ended 3-0 in favor of the home side.

Despite his inability to impose much pressure on Metz's defenders, Onyekuru's presence at  Stade Louis II should be a source of excitement for manager Leonardo Jardim and Monaco fans.

The Nigerian star, who failed to make his Premier League debut due to work permit issues, has massive potentials to becoming an important player to Monaco just like Anthony Martial during his days with the Ligue 1 outfit.

Martial, 23, was an integral part of the Principality club, thanks to his pace which allowed him to get past defenders with ease.

The Frenchman was equally a good goalscorer for the club before he was snatched by Manchester United in 2015.

The France international managed 11 goals in 49 Ligue 1 matches during his two-year spell with Monaco.

Onyekuru's pace and ability to score goals can be likened to the Frenchman as he found the back of the net on 16 occasions for Galatasaray in all competitions last season.

He has all the potentials to become the 'next Anthony Martial' in Jardim's team, and fans aren't expecting anything less from their summer signing.