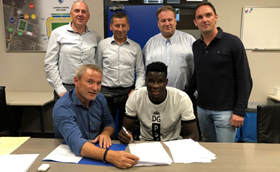 Through their official website, Belgian First Division A champions Racing Genk have announced that they have reached an agreement with FC Midtjylland for the transfer of Paul Onuachu.
The Nigeria international has inked a five-year contract with the Blue-White, keeping him at the club until the summer of 2024.
Though the fee paid by Racing Genk has not been disclosed, it has been reported by the Belgian and Danish media to be in the region of seven million euros, making him the most expensive Nigerian player sold by a Scandinavian club.
Chelsea paid 16 million pounds to sign former Super Eagles captain John Obi Mikel but Norwegian outfit Lyn Oslo received only four million pounds from the deal.
Onuachu began his professional career at FC Midtjylland in 2012 and netted 74 goals in 181 games for the Superliga side.
The 25-year-old was loaned out to Vejle BK in 2015, playing 13 games and netting 5 goals.
Ifeanyi Emmanuel
Photo Credit : krcgenk.be