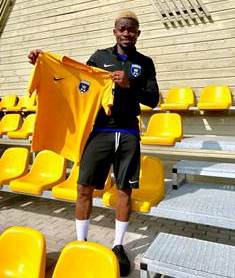 Waasland-Beveren have handed trials to Nigerian striker Lucky Omeruo, informs the  Belgian First Division A side on their official website.
A free agent following his departure from Spanish side Leganés B, the younger Omeruo, whose sibling Kenneth starred for the Super Eagles at the 2019 AFCON, is hoping to impress Waasland-Beveren coaching staff led by Adnan Čustović.
Lucky Omeruo played as a trialist for Waasland-Beveren in their 2-1 loss to Westerlo in a friendly this week and was deployed as a right back throughout the ninety minutes he spent on the pitch.
He is more talented than his famous brother Kenneth and offers more versatility as he's capable of playing in several positions.
In addition to being a striker, Lucky, who has been invited to the Flying Eagles and Nigeria U23 squads in the past, also excels as a winger and midfielder.
On his curriculum vitae, the 23-year-old previously turned out for FK Palanga, Birkirkara FC, Marsa FC, Tarxien Rainbows and Bayelsa United.
Ifeanyi Emmanuel