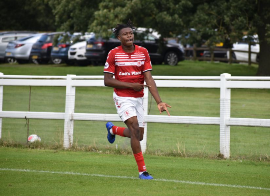 New Middlesbrough signing Samuel Folarin has netted his first goals for his new employer, allnigeriasoccer.com reports.
The teenage winger scored a first half brace as Middlesbrough registered a 3-2 win against Swansea City in a Premier League 2 match at Rockliffe Park on Friday afternoon.
Folarin came close to breaking the deadlock with a header in the 20th minute but he made amends three minutes later, scoring another header following a delivery by Patrick Reading.
Boro increased their lead to 2-0 when the Nigerian netted his second of the afternoon in the 32nd minute, before Liddle made it 3-0 from the spot two minutes into the second half.
Swansea City relied on two goals from Cullen and Joshua Thomas to reduce the deficit in the second half.
Folarin, who made his third appearance of the new season, was replaced in the 87th minute.
Igho Kingsley
Photo Credit : mfc.co.uk