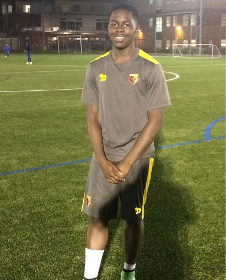 Allnigeriasoccer.com can exclusively report that former Watford teenage sensation Nigel Aris has received his first ever call-up to the Nigeria National Team.
On Friday, August 23, the Nigeria Football Federation officially requested for the release of the promising winger for the ongoing Nigeria U17 Men's Team trials taking place in Abuja.
According to information on the invitation letter with reference number NFF/GEN/TECH/10 VOL.IV, Aris will train with the Golden Eaglets until September 4, 2019, with a view to his inclusion on the squad list for the World Cup.
The highly-rated teenager was on the books of Watford until this summer when he turned down a scholarship for a move to Shrewsbury Town.
Now a first-year scholar at Shrewsbury Town, he is regarded as one of the brightest and most direct winger of African descent in his age group, and could form a deadly partnership with Arsenal super kid Malcolm Ebiowei if the two players are selected by manager Manu Garba.
The Golden Eaglets are preparing for the forthcoming FIFA U17 World Cup taking place from the 26th October to  17th November, 2019 in Brazil.
Ifeanyi Emmanuel