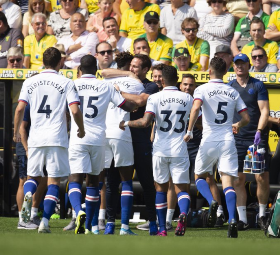 Chelsea boss Frank Lampard has hailed Tammy Abraham for his goalscoring performance against Norwich on Saturday.

The young centre-forward scored the first goal of the encounter in the third minute as his beautiful volley went straight into the net.

He scored his second goal of the day in the 68th minute, which was enough to give Frank Lampard his first victory as Chelsea boss.

The happy manager said after the game that he was pleased with the player's brace. He also revealed the reason behind Abraham's celebration.

"Tammy for his two goals. He's had a tough little period for reasons we all know and strikers get judged purely on goals at times and sometimes that's slightly unfair but when you talk about character and enthusiasm to play for this club Tammy is right up there. He shows it every day. He can get better and better so I'm, really pleased for him."

On the reason behind the player's celebration (where he ran straight to his manager), Lampard added:

"I spoke to him before the game that I felt that today was the day for him. It was a bit of kidology before the game, really, but I do trust in him and I know that as a striker, a young striker, you do need that support and I genuinely mean that.

"I did feel something for him today and it will do wonders for his confidence and I am pleased that he came over. But we are a group, it wasn't just him who came over, everyone comes over and that is how we need to move forward."

Since making his Chelsea debut in 2016, the 21-year-old couldn't find the back of the net until today's game.