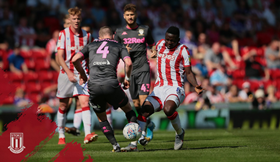 Former Super Eagles trainee Ebere Eze was in top form for Queens Park Rangers on Saturday as he helped his team to a 3-1 thrashing of Wigan Athletic.

The young attacking midfielder started the encounter but couldn't find the back of the net in the opening half. However, he scored in the 61st minute to bring the scoreline to 2-1.

He ensured that the visitors couldn't get back into the game when he assisted Hugill's goal in the 81st minute to which sealed maximum points for his team.

In the same vein, Liverpool loanee Ovie Ejaria found the back of the net for Reading who defeated Huddersfield Town 2 - 0.

Moses Odubajo was involved in Sheffield Wednesday's 2-1 defeat to Preston North End, he was substituted in the 66th.

Dominic Iorfa was among Sheffield Wednesday's players who failed to come off the bench.

Nottingham Forest defeated Fulham 2-1 at Craven Cottage, Sammy Ameobi grabbed an assist in the 61st minute as his pass was converted by Grabban to double their lead.

Finally, Semi Ajayi was on from start to finish as West Brom held Derby County to a 1-1 draw.