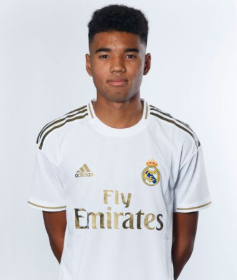 Marvin Akinlabi made his competitive debut for Real Madrid's reserve team, Real Madrid Castilla on Sunday, August 25.
Spain and Real Madrid legend Raúl González Blanco handed a debut to Akinlabi as his side were held to a 1-1 draw by
Las Rozas in the third tier of Spanish football, with the attacking midfielder introduced off the bench in the 68th minute.
With Real Madrid Castilla acting as a feeder team to the most successful team in the Champions League, the Nigerian midfielder has taken one step closer to making his debut for the first team of the Spanish powerhouse.
In the Segunda B game against the newly promoted Las Rozas at Estadio Navalcarbón, the hosts went ahead through álvaro in the 48th minute but Jordi equalised for Real Madrid in the 55th minute.
Akinlabi is battling Jordi Martín, Francisco Feuillassier and César Gelabert for a spot in Real Madrid Castilla midfield in the new season.
The 19-year-old joined Real Madrid in the summer of 2016 after spells with Sporting Ciutat de Palma, Tranmere Rovers, La Salle and Es Jonquet Penya Arrabal.
Igho Kingsley
Photo Credit : realmadrid.com