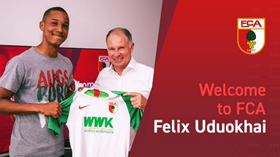 Through a press release published on their official website, Wolfsburg have announced that Germany U21 international of Nigerian descent, Felix Uduokhai has signed for Bundesliga rivals FC Augsburg on a season-long loan.
Uduokhai is embarking on his first loan spell since joining Wolfsburg from 1860 Munich in the summer of 2017.
The central defender has made 37 appearances for Wolfsburg, scoring three goals but has seen his first team opportunities limited in the new season after missing games against Cologne and Hertha Berlin.
He was a member of the German U21 squad that finished second in the 2019 European U21 Championship but was an unused substitute in all their five matches.
Apart from the aforementioned clubs, he has worn the jerseys of the youth teams of VfB Annaberg 09 and Erzgebirge Aue.
Uduokhai's loan deal runs until June 30, 2020 and FC Augsburg has secured a purchase option for the 21-year-old.
Igho Kingsley
Photo Credit : fcaugsburg.de