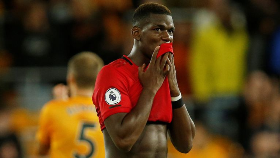 We know that racism has no place in sport or anywhere else. First, we are going to talk about something that has become an integral part of any sport – betting.

1xBet is a trusted online bookie that lets you place bets on various sporting events across thousands of leagues, cup competitions, and more.

There, you can take full advantage of sports betting https://1xbet.mobi has the best odds, fastest payouts, and most lucrative bonuses.

Pogba’s spot kick was saved during a 1-1 draw with Wolverhampton this past week. After this incident, various MU supporters began racially abusing the Frenchman on social media.

Yet another Man Utd player, Marcus Rashford, also expressed his disgust – he said that Man Utd is a big family and if fans choose to target Pogba with their cruel insults, they essentially are going after the entire team.

Unsurprisingly, this incident garnered a major response from the football community. Man Utd officials are doing their best to identify the individuals responsible for the abuse directed at the Frenchman.

Former Man Utd player Phil Neville suggests that players should stop using social media altogether in order to send a message that such behavior would not be tolerated.

All of the upcoming fixtures are tough, but you have to wonder if this incident is going to put extra pressure on Man Utd as a whole and Paul Pogba in particular.

Many people point out that you can’t really expect the players to perform at the top level when their own fans turn their backs on them.

Nonetheless, it remains to be seen what Man Utd is truly capable of this season.

According to today match 1xBet predictions, Man Utd are expected to beat Crystal Palace at home.
The most likely result here is 1-0 win for United. You can take this free prediction and use it to win big at 1xBet.

This online bookmaking company has the quickest payouts and the most lucrative bonuses, so you can easily create an account in five minutes flat and then bet on Man Utd’s win.