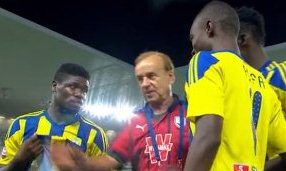 Swiss Super League side FC Zurich are on the verge of announcing the capture of Nigerian striker Tosin Aiyegun.
FK Ventspils owner Adlan Shishhanov said at a press conference after the 1-0 victory over Spartak Jūrmala that it was the last game in the team for Aiyegun, informs Sportacentrs .
The 21-year-old is the leading scorer in the Latvian Virsliga with 11 goals from 23 starts, including his second half winner in today's match against Spartak Jūrmala.
It is thought that Aiyegun is being signed as a direct replacement for Stephen Odey, who moved to Belgian topflight club Racing Genk in the summer transfer window.
Over the last three seasons, he has contributed to 55 goals (35 goals, 20 assists) in 89 matches for FK Ventspils and featured in the qualifying rounds of the Europa League.
FC Zurich have scored five goals after six matches in the Super League.
Ifeanyi Emmanuel