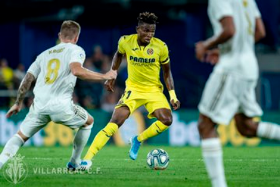 Super Eagles winger Samuel Chukwueze was in action for 55 minutes at the Estadio de la Cerámica on Sunday night as Villarreal played out a nervous 2-2 draw against Real Madrid.
Chukwueze has thus played in all of the Yellow Submarine's games so far this season and was on target in the thrilling 4-4 draw against Granada on 17 August.
Gerrard Moreno scored Villarreal's first goal in the 12th minute when he finished off an Ekambi pass after an initial exchange of passes between the duo following a blistering counter attack which the Nigerian was part of.

Gareth Bale restored parity for Los Blancos in added time of first half with a simple tap in from a Dani Carvajal cross.

Chukwueze was substituted off for Javi Ontiveros  in the 55th minute moments after Ferland Mendy, making his La Liga debut for Real Madrid, thwarted his run as he made to bear down on goal.

Madrid had a goal by Karim Benzema chalked off by the VAR officials for offside five minutes after Chukwueze exited the field.

Moi Gomez put the hosts ahead again with 16 minutes left to play side footing home the ball which fell kindly to him after Thibaut Courtouis had made an instinctive save with his foot.

Bale got another goal for the visitors but was red carded after two yellow cards albeit his goals won him the Man of the Match award.