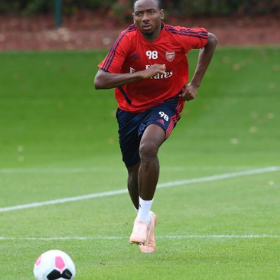 Through a statement on their official website, arsenal.com, Premier League side Arsenal have confirmed the transfer of Nigeria youth international Kelechi Nwakali to SD Huesca, subject to the completion of regulatory processes.
The central midfielder is joining the Spanish Segunda Division side in a permanent deal, ending his three-year association with Arsenal in the process.
Signed from Diamond Academy in 2016, Nwakali was unable to make his competitive debut for the Gunners because he was not granted a work permit by the English authorities.
The 21-year-old was loaned out to MVV Maastrich, VVV Venlo, and again to MVV Maastrich before spending last season at Porto B.
Nwakali was courted by several clubs not limited to Arsenal, Ajax Amsterdam, Olympiakos, Fenerbahce, Udinese and Sporting Clube de Portugal after winning the Golden Ball award at the 2015 FIFA U17 World Cup.
He is the third Nigerian player to depart Arsenal in the summer transfer window after Alex Iwobi and Xavier Amaechi.
Ifeanyi Emmanuel
Photo Credit : arsenal.com