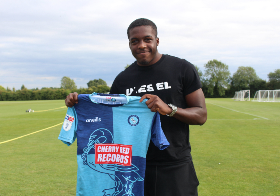 Nigerian midfielder Nnamdi Ofoborh has completed a season-long loan move to English Football League side Wycombe Wanderers from Bournemouth.
The Nigeria U20 international is a highly-rated youngster who has made Eddie Howe's first-team squad, though, he is yet to feature for the club in any Premier League match.

Speaking after acquiring the player's services, Wycombe manager Gareth Ainsworth told the club's website that he's happy to have Nnamdi Ofoborh in his team for the season.

He said: "Nnamdi is a player I've admired for a long time and I know he's very highly-rated at Bournemouth, so I'm delighted to be able to bring him here. He's done extremely well for them throughout pre-season and comes to us sharp and ready to play."

Ainsworth also commend the youngster's strength and playing pattern, and he believes he will play a massive role in his team for the rest of the campaign.

"He's a very strong and powerful midfielder who suits our style, and can also cover in the centre of defence which could be valuable for us. I'm excited to see what he can bring to the team and would like to thank Eddie Howe at Bournemouth for allowing him to continue his development here." he said.


Ofoborh was part of Paul Aigbogun's Flying Eagles team that reached the round-16 stage of this year's U20 World Cup in Poland.
Ibukun Italoye
Photo Credit : wycombewanderers.co.uk