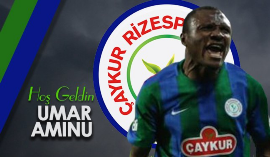 Allnigeriasoccer.com brings you a round-up of the transfers involving Nigeria-eligible players on transfer deadline day in England, Turkey, Italy and Switzerland.
FK Ventspils striker Tosin Aiyegun has sealed a move to Swiss Super League side FC Zurich, penning a four-year deal until the end of the 2022-2023 season.
Stefano Okaka has ended his association with Premier League side Watford after completing a permanent transfer to Udinese, where he spent the second half of last season. His contract is for three seasons.
Josh Emmanuel has signed a contract with League One side Bolton Wanderers until the end of the season after departing Ipswich Town.
League Two outfit Bradford City have completed the signing of Queens Park Rangers forward Aramide Oteh on a season-long loan.
As previously reported, Bournemouth's Nnamdi Ofoborh and West Ham's Ajibola Alese have been loaned out to Wycombe Wanderers and Accrington Stanley respectively, while Arsenal's Kelechi Nwakali has completed a permanent switch to SD Huesca in Spain.
And in Turkey, Nigeria international Aminu Umar has put pen to paper on a 3+1 year deal with Super Lig side Rizespor, a team he played for on loan from Osmanlispor in the 2018-19 season.
Italian Serie B club Spezia have loaned out promising midfielder Theophilus Awua to Serie C side Bari for the entirety of the 2019-2020 season.
Ibukun Italoye
Photo Credit : caykurrizespor.org.tr