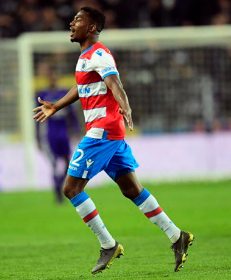 Queens Park Rangers' Olamide Shodipo has extended his contract with the EFL Championship club until the summer of 2022, informs the Hoops on their official website.
Queens Park Rangers have kept their faith in the winger by offering him a new deal even though he is recovering from injury.
Shodipo has gone on to play nineteen competitive games for the London club since making his debut against Leeds United on the opening day of the 2016-2017 season.
Queens Park Rangers have a further year’s option beyond 2022.
Another exciting Nigerian winger in Emmanuel Dennis has committed his future to his European club, penning a deal until 2022 with Belgian First Division A giants Club Brugge.
The 21-year-old has opted to extend his stay at Club Brugge despite interest from foreign clubs.
Since his arrival in Belgium from Zorya Luhansk in the summer of 2017, the Nigeria U23 international has tallied 21 goals and provided nine assists in 78 matches.
Igho Kingsley
Photo Credit : clubbrugge.be